What types of Trans-Siberian Railway tickets are there?

Trans-Siberian Railway tickets are always booked as single from-to tickets. If you want to drive from Moscow to Beijing with a stopover in Irkutsk, you need a ticket from Moscow to Irkutsk and a ticket from Irkutsk to Beijing. There are no season tickets or a rail passes as in other countries. Each section of the route must be booked individually. The more breaks you make to your journey, the more expensive it gets. You buy a bunk reservation on a particular train along with the ticket. That is to say, you are bound to that particular train and your ticket is invalid if you miss it. Tickets always go on sale 45 days before departure of the train. If you order your tickets for the Trans-Siberian Railway on the internet you can usually book earlier.

Since Russia is the largest country in the world, the country has nine different time zones. The Trans-Siberian Railway trains often run through several of them. To avoid any time zone chaos, Moscow time always applies in Russian trains. All the clocks in and around stations and your tickets will always display Moscow time. If your ticket says the train leaves at 06:59 hours, it could be a completely different time in your time zone. That’s pretty confusing and the best thing to do is to always carry a clock with Moscow time with you. Life on the Trans-Siberian Railway ticks according to Moscow time. You sleep when it is night in Moscow.

Depending on where you buy your ticket, the information as to when and where the train goes and where you are to sleep is in Russian only. I have translated a ticket and marked the most important information so you can find your bearings. 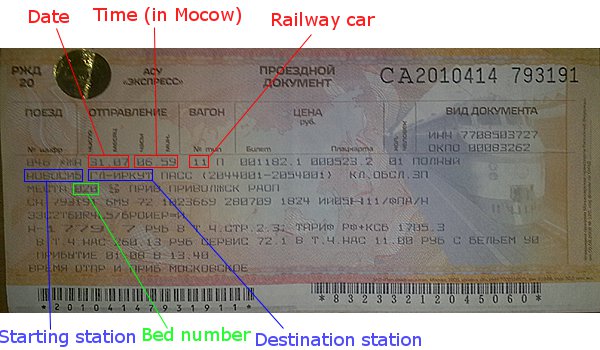